Wharton Esherick, known for his exquisite mid-century designs was a woodworker that created expressionistic furniture and interiors. He focused on the shape of his creations, treating each piece as a unique sculpture. He created curvilinear free-form designs that elicited fluid movement and emotion. His approach garnered him significant recognition for bridging the gap between art and craft.

His wooden art spans a fifty year period from 1920 until his death in 1970. Though, it was not until around 1930, when he was in his 40’s that his emphasis turned to furniture design. He spent his early years painting Cubist and Impressionist landscapes and portraits, as well as, designing prints, posters and theater sets.

Wharton Esherick has been called the link between the Arts and Crafts Movement and the revival of furniture making following World War II. His legacy lies as the dean of American craftsmen and the pioneer of the Studio Furniture Movement where he was joined by George Nakashima, Sam Maloof, James Krenov, Tage Frid, and later, Wendell Castle.

His hilltop studio/residence, now a National Historic Landmark for Architecture, has been transformed into a museum in Paoli, PA featuring more than 200 pieces of his works. It has been preserved to resemble what it looked like when Esherick lived and worked there. The museum is open to the public through guided tours by appointment.

Currently twenty pieces from the Wharton Esherick Museum will be on view at the LongHouse Reserve in East Hampton through October 8, 2011. 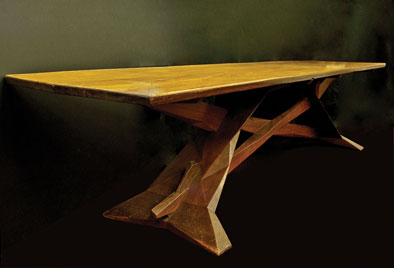